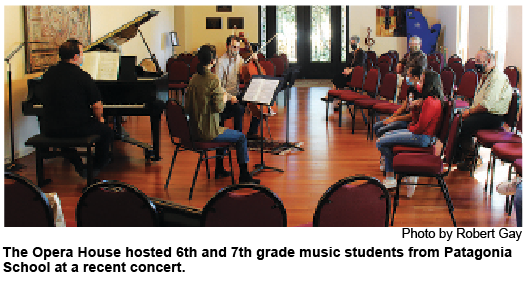 Written by Sarah Klingenstein for the Patagonia Regional Times –

Christina Wilhelm, Executive Director of the Santa Cruz Foundation for the Performing Arts (SCFPA), was named a 2021 Santa Cruz Ambassador for the Arts in October at a ceremony held in Nogales. And she was right back to bringing music into the lives of local residents the following week, when she hosted the first of four mini-concerts for youth at the Opera House, which has been a dream of Wilhelm’s, at least ten years in the making.

The students of Scott Connuck’s 6th and 7th grade music class at Patagonia Middle School were treated to chamber music played by The Sky Islands Piano Trio, who were preparing for a concert at the Benderly- Kendall Opera House on Oct. 31. They played Ludwig von Beethoven’s Piano Trio, Opus 1, Number 1, after introducing students to the instruments and the concept of chamber music as a conversation between the instruments. Evan Kory, piano; Emily Chao, violin; and Juan Mejia, cello, met four years ago while teaching a class about chamber music to adult musicians. They soon learned how much they enjoyed playing together and have been together since. Kory is well-known to local music fans, as a member of the SCFPA Board, former artist-in-residence, and frequent performer and accompanist at the Opera House. Chao and Mejia are this year’s artists-in-residence. All three hold doctoral degrees.

Both Wilhelm and Kory have been active in the arts this year. Kory has recently been appointed Director of Arts for Learning at the Santa Cruz County School Superintendent’s office. Under a banner stating that “Art is the Highest Form of Hope,” Superintendent Alfredo Velásquez recognized October as Arts Month and honored Wilhelm,as well as almost a dozen other community members whose “contributions have had an extraordinary impact on the Arts throughout the County,” especially those whose work continued or even increased during the pandemic.

Wilhelm embodies the spirit of hope. When public events shut down due to COVID19, she searched for ways to continue bringing music into people’s lives, presenting live-stream concerts from the Opera House, and began an outdoor movement and music program called which she named Zoombachs. Knowing what a financial and emotional hardship the pandemic brought to musicians no longer able to perform, she urged local music lovers to continue to support their work through the Foundation.

On the way back to the Patagonia School’s campus after the concert, Connuck praised the musicians’ skills and said the students really enjoyed the performance. “They played with such elegance and passion that one student remarked on the way back to campus, ‘I wish we could go back and see more concerts like that!’”