“How did you come up with your name?” asked a curious audience member… “Well, we play Django’s music and we shred!” Alex Ciavarelli and his musical duo partner Rudy Marquez explained that “shredding” refers to the very fast playing they’ve mastered through the exploration of Django Reinhardt’s music.
One of the most influential guitarists of all time, Django left a recorded legacy that is unparalleled in its electricity and originality. He was the first to feature the guitar as a lead instrument in a jazz setting and established the style known as “Gypsy Jazz” in the first half of the twentieth century. Although he only lived to the age 43 it is widely accepted that he’s influenced every guitarist that has come after him. We are grateful to Alex and Rudy for sharing so much of Django’s fascinating history and evolution as an artist.

Although there wasn’t a drummer or bassist present, the Django Shredders utilized Django’s signature technique described as a “lift palm” rhythm that adds infectious syncopation and excitement to his gypsy jazz. Alex and Rudy traded off accompanying during their virtuosic solos—their facility and ability to perform in the impressive early jazz style was astounding! In addition to playing some of Django’s most iconic pieces they also performed works by other composers of the period such as Cole Porter’s Night and Day. An especially poignant song the duo performed was “Nuages”. Django Shredders’ program and performance was remarkable and the audience left that evening feeling inspired and uplifted. 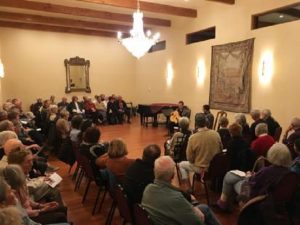